It’s been a year since I first heard the news. I was in Kuwait on April 17, 2007, preparing for my second tour in Iraq when I stopped to call my wife on the way to the chow hall. I’ll never forget her crying when she told me that Shaun Blue, a fellow Marine lieutenant and a very close personal friend, had been killed in combat the day before in Iraq’s An-bar Province.

I first met Shaun Blue in Quantico, Va., at Officer Candidate School, when he ran the initial three-mile portion of the physical fitness test (PFT) in 16 minutes. He finished first on the run, two minutes faster than his closest competitor.

When we arrived back in Quantico to attend The Basic School, Blue and I were assigned to the same squad, where I soon realized he could not only ace the Marine Corps PFT but every challenge the instructors tried to throw at him.

A top performer – and a helping hand

I’ve been told that three qualities that make a good Marine Corps officer are intellect, force of will, and character – with character being the most important. Blue showed me on several occasions he had all three attributes.

Though I struggled to get through the very challenging Infantry Officer Course, Blue seemed to glide through the difficulties effortlessly.

In these situations, other officers who probably looked better on paper than Blue crumbled under the mental and physical pressures. When we were tired, when it was cold and wet – that is when Blue excelled.

He was consistently the first person to push the rest of us through those dark nights, a testament to his desire to support his peers. In the very competitive environment of a military school, Blue rose to the top 10 percent of the class with his intellect and force of will.

Ironically, Blue’s selfless character is what kept him from being the No. 1 graduate. He could have easily surpassed the other top performers, but he did not care about merits of achievement or superficial accolades – he cared about doing the right thing.

Instead of spending the extra hour on his own work to be the No. 1 guy, he would spend that hour helping the sub-par performers reach the level they needed to pass the course. More important, he helped shape them into good infantry officers who would go on to lead men into combat. Blue had character.

He attended the University of Southern California on a Naval Reserve Officer Training Corps Scholarship. The philosophy major’s grandfather, a World War II Marine veteran, influenced his decision to join the military.

Standing in Kuwait that day in April 2007, I said a silent prayer for my friend. After taking a deep breath, I decided I would mourn his death only after my own unit made it through our deployment.

My unit finished its deployment in November, and I returned to civilian life in the United States last month. It was only then that I began to mourn and truly take stock of Blue.

It had been almost a year since Blue’s death in Iraq when I received a letter from his unit that he had been posthumously awarded the Bronze Star with “V” for valor combat distinguishing device. Many times during his service in Iraq, Blue exposed himself in dangerous situations to accomplish missions with the fledgling Iraqi police.

To honor Blue’s Bronze Star, several fellow marines and I decided to make the trip to Munster, Ind., to see Blue’s parents and pay our final respects to our lost friend.

On the way to Blue’s parents’ house earlier this month, I noticed a billboard on Ridge Road heading into Munster that said: “IN MEMORY OF 1ST LT SHAUN BLUE UNITED STATES MARINE CORPS.”

At Jim and Debbie Blue’s house, I had the honor of listening to several other marines who served with Blue tell his parents fond memories of their son.

There was the time when Blue’s truck broke down 30 miles outside the Marine Corps Air Ground Combat Center in Twentynine Palms, Calif., on the very day he was supposed to report into his first fleet unit. With limited options, Blue ran all 30 miles into town and checked into his unit.

There was the other time when a tough sergeant challenged him to a boxing match. Normally, it would be best for a green lieutenant with little to no boxing experience to avoid stepping into the ring against a golden-glove boxer who had beaten everyone in the entire platoon. After continued nagging, Blue knocked out the veteran boxer with his first punch.

On April 5, several lieutenants who had flown in from around the country headed to Munster’s Community Veterans Memorial Park. Each of us expressed surprise that Munster’s memorial park, filled with lifelike sculptures of soldiers in action, rivaled any monument we’ve seen in the nation’s capital.

At the ceremony, Blue’s parents were awarded his well-deserved Bronze Star, one of the military’s highest awards. After the presentation, the crowd walked through the park grounds on a red brick path, observing the monuments to wars past. Near the middle of the path, there is now a brick dedicated to Blue. Very close by is another brick dedicated to his grandfather, Marine veteran Cecil T. Blue. I’m certain that Blue’s bedrock character was in a large part influenced by his elderly mentor, whom he spoke of often.

A face of character etched in stone

After walking through Memorial Park, we walked over to a beautiful brick pavilion. In the middle of the exhibit is a permanent display of black polished granite that reflects images almost as clearly as a mirror.

Etched into the polished stone is a picture of Blue in his dress blues. As I looked into the granite, I locked eyes with the engraving of Blue and had to pull away because I was hit by a wave of emotions I had never felt before. As I tried to gather my composure, Blue’s mother, Debbie, came over and gave me a hug. I felt selfish. I should have been comforting her. She lost her son and here she was comforting me. I saw again where Blue had gotten his most important leadership trait. The entire Blue family has character.

On the way back to the Blue household, another lieutenant and I discussed what a shame it was that Blue had been killed. Our conversation then shifted to how only a small proportion of the American public truly carries the burden of this war.

The other lieutenant commented that while soldiers are risking their lives in Iraq, the majority of Americans are at the mall, oblivious to the sacrifices the military personnel and their families are making on a daily basis. In no time, the atmosphere in the car got very bitter.

To lighten the mood, we pulled into Kilroy’s Pub amp; Restaurant in Lansing, Ill., just outside Munster.

Inside, about 30 local patrons stopped talking simultaneously and stared at us. We were, after all, wearing our Marine Corps dress blues. When we tried to buy two beers, several locals fought over who would get to buy us the drinks.

We sat down next to a local who introduced himself as “Sticks.” He asked us why we were in town. We told him. Sticks stood up and asked for the bar’s attention. He announced the reason for our visit and then everyone in the room stood and gave us a lengthy ovation. They had heard of Blue. We had to practically fight to get out of the bar and back on our way to Blue’s parents’ house.

During the drive, the other lieutenant and I decided that although the rest of the country might not care, people in the small towns definitely appreciate the military’s sacrifice. We decided that the majority of the country is not anti-military. They are just indifferent and largely unaware of the enormous burden that the young men and women in service carry in the name of their freedoms.

Consequences of pulling out of Iraq

Five years after the start of the Iraq war, and a year after Blue’s death on April 16, I feel we are obligated to the Iraqi people and the rest of the world to not hastily abandon what we have invested so much in. I truly believe America can be an agent for change. I have often asked myself: If we pull out, what type of future would we be allowing to come about?

I like to think that if the streets of heaven are guarded by marines, as the Marines’ hymn suggests, that 1st Lieutenant Shaun Blue is now forever walking the lines of the perimeter checking on the marines defending their eternal post. 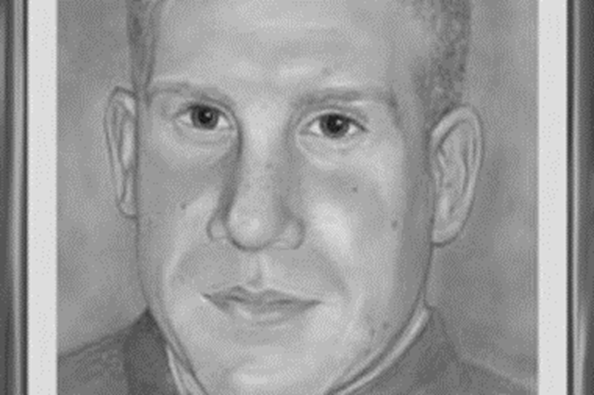 • Luke Larson served two tours in Iraq as a Marine lieutenant with the Third Battalion, Seventh Marine Regiment. He now lives in Scottsdale, Ariz., with his wife, Kristen. They’re expecting a child this November. If it’s a boy, they plan to name him Blue.